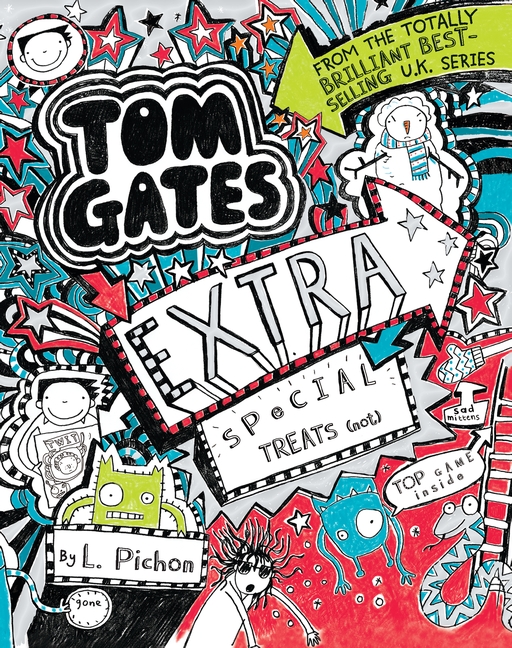 Tom’s hoping to be made a Star Pupil at school, but that means he needs to put more effort into his homework than his doodles. Easier said than done! Meanwhile, his grandparents (the Fossils) are about to celebrate their fiftieth wedding anniversary, and Uncle Kevin wants to plan something special. Then the cold weather turns to snow and school gets canceled, leaving Tom is snowed in at home with quite the crew, including his especially grumpy sister, Delia; his cousins, and his annoying classmate, Marcus Meldrew. Aren’t snow days supposed to be fun?

Between snowstorms, visiting relatives, and chocolate raisins, everything’s piling up around Tom Gates in his sixth doodle-packed diary.

If you have a hardback copy of the book you can PLAY the games I drew in the back. My favorite board game was snakes and ladders and when I played with my Dad he’d cheat if the game was taking too long!

What did you think of this book?

Did it make you laugh out loud, cry or learn things you never knew before?

We would love to hear from you!

Take a BOOK QUIZ to test your memory!

Your review has been submitted successfully.